Today Lily's best friend A got back into town for a week so I decided that instead of arguing with her about getting work done we'd take the week off from school.

This put me in a very, very, good mood.

I decided to celebrate by doing a little junking. Lately I've been going on the weekends, but it's always too crowded to properly relax and browse. Today the shop was perfect and I took my time working my way up and down the aisles.

When I saw this beautiful little table for 14.99 I knew it could be awesome. 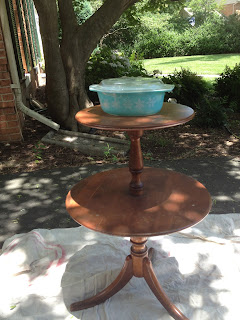 I also grabbed the pyrex casserole dish for 4.99 because they come in so handy.

Did I mention that I also had a 25% off coupon?

The weather was 76 degrees and dry. You know what that means, right?

Look at how beautifully this table came out! 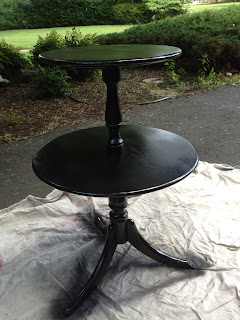 I used a high gloss paint to give it a rich coat. Once it's completely dried I'll find a spot for it. Since I already had the paint out I thought I'd give my dress form a makeover.

At the old house it's previous apple green color was perfect, but here a glossy coat of black will make it really pop in the living room. 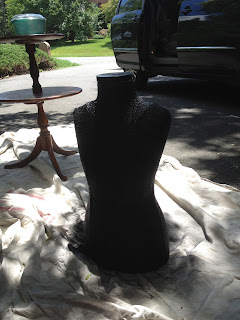 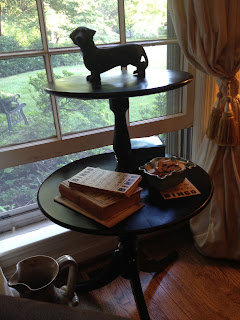 Not too shabby, eh?

Meanwhile my dress form is making herself comfy in the living room. She needs a hat though and maybe some jewels. Will be sure to find her something fabulous! 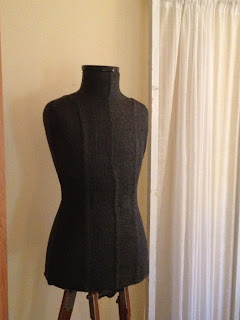 How to Make New Friends...

Yesterday morning Lily managed to have her act together early enough to go on the dog walk with me. It is possible that by early I mean 10:30, but I digress. We took the dogs down to a gorgeous trail along a creek where we delight in seeing all manners of flora and fauna.

As we were walking along the trail I noticed a middle aged man walking towards us. He was without dogs or children, was not running, nor was he carrying any props which might explain his presence and reassure an unarmed woman with her child.  Having been schooled in Law and Order I know a few things about what a perp looks like and am always on the lookout for the criminal element.

As we approached him he addressed us in a very friendly way.

He then addressed Lily directly by correctly guessing her age. We chatted for a minute and then moved on.

Once Lily and I were out of ear shot I said to her, "That guy was so weird!"

"Yes!" she agreed, "Why was he walking all by himself? Most guys walking are a least with a dog or a kid or something."

We then spent the next twenty minutes discussing the weird guy, discussing other weird guys, personal safety, listening to ones gut feelings about weird situations and so forth. We made our way back to the beginning of the trail determined not to make eye contact with Bob who was now sitting on a bench talking on his phone. Lily and I hurried past, avoiding him completely.

Later in the day Lily and I went to the pool. I settled myself on a chaise and took out my book when standing in front of me was Bob! We said hello and I cut to the chase, asking a question which would reveal whether he was a pervert stalker or not. "Are you here with your kids?"

Reader, he was there with his kids. I saw the children with my own eyes. It turned out that he is a very nice and friendly man, a retired Army physician in fact, who used to hunt down disease outbreaks in Asia and now researches traumatic brain injury treatments. His main crime is not understanding the inherent wariness with which women experience men in situations like the one we were in that morning. We chatted pleasantly for over an hour. At one point Lily came over asking for snack bar money.

And that my friends is how you make new friends when you move.
Posted by Sara Padrusch at 2:55 PM 3 comments

Random and disjointed, but something nonetheless...

Here in the south it's been summer for about two months. Back in Boston two months of summer is followed by fall and so I have found myself thinking about fall a lot. Whenever I mention this to David he reminds me that there are still months of summer, and yet I can feel the pull of fall in the future.

This week I found a dying mouse in my garage. He was sitting there with labored breath and did not scurry away when I came by.  I scooped him up in a dust bin and moved him to the flower bed and felt that I had done a good deed. At least he could die shaded by flowers and not surrounded by car exhaust and the detritus of the children.

Satisfied with myself I drove away, dropping the children off at their art and gymnastics classes. When I returned home I drove into the garage. Upon getting out of the car and opening the trunk I discovered that the mouse had not been content to die among the flowers, but felt the need to make a political statement and had planted himself once more in the garage where he was run over by my car.

Coping with entrails are not a part of adult life which I particularly relish so I delegated the mouse corpse removal to David, who having missed so many rotted animal opportunities in the past most surely had it coming.

Happily I have found no life at all in the basement, which is a place I have been spending a lot of time as of late. I went through the boxes labeled "Christmas" and was rewarded with beach towels, sun screen, and the final piece of the slipcover to the couch.

Lately I have been indulging in one of my favorite summer past times. I have been reading British chick lit- more specifically the kind where the woman has a cottage and a garden and wears wellies. One of my favorites of this genre is "Hen's Dancing"by Raffaella Barker. I need some recommendations of more of this sort of book. Please let me know if you know some!

In the meantime I will be trying to educate the children and keep the squalor at bay, though honestly, it's awfully tricky to do both of these at once.

Posted by Sara Padrusch at 9:37 AM 2 comments

Today was another day of homeschool excitement. I spent about an hour arguing with Lily about doing her math.

"Lily, stop talking to the dog."

"Lily, get off the floor with the dogs and do your math!"

Finally, she got that done and we moved on to Spelling and History (all about Crete!) and Grammar and then we had some tornado warnings and called it a day.

Oh yes, we had some tornado warnings which adds a little something special to the day. Interestingly, David is personally responsible for tornadoes since they only appear when I am home alone with the children and he is off traveling. In fact, it was right around this time last year when we were living in Boston and several tornadoes devastated parts of Massachusetts. Luckily, today's tornadoes didn't seem to really live up to their much hyped potential, and really, who doesn't have that problem?

Once the tornado warnings ended I went into the basement to finish the last bit of the unpacking. By finish, I do not mean to imply that all the boxes are empty. More specifically my boxes of treasure crap has been unpacked. David's half of the basement is full of boxes, but I am happy to report, they are not my problem.

Since David's company hired packers for us, I did not worry too much about sorting and purging before the move. The house was so tiny and the move happened so quickly that there really wasn't the space nor time to properly consider everything. When we move again next year I determined to approach it with utter efficiency and since I like to fret about things as far in advance as possible, I have been sorting like mad. Box after box has found its way to goodwill, followed by bag after bag to the curb.

It's been interesting to find things in boxes as I unpack. Today's highlights included a bag of dirty laundry, salt and pepper grinders, the drill which I replaced in January, and a piece of petrified cat poop.

Yes, they packed the poop. And then I unpacked it. Honestly, I had no idea that my life would go like this.

Now with more Coffee! Free dustbunnies with every purchase!

Blogs worth your time