So yesterday I went to the eye doctor ready for battle. I did my hair, put on lipstick and clutched my receipt. I knew that god was on my side when I scored a parking spot right in front of the office.

I approached the door. My heart was pumping. My palms were sweating.

I noticed that the office was closed on Wednesdays.

Talk about impotent rage. I was forced to go back home to do laundry and obsess over my plan of attack.

This morning I changed my strategy. I decided to bring my children with me so that if things went bad I could employ the "Bobby Goren" method of handling people. When Bobby is interviewing suspects he likes to wander around their space and pick up breakable things. Lily is particularly well suited to this sort of tactic.

When we arrived at the office, it started off with smiles. Clearly, the receptionist did not recognize me. I produced the broken glasses and explained that they had fallen apart after only four months of use.

"Well", she began, "They didn't just break. Something must have happened to them."

It is when I began speaking that I saw the flash of recognition, the awareness that dear god, that woman is back!


"My daughter," I said, "is a book worm. She plays no sports. She does not roughhouse. The glasses were inferior and broke."

She visibly recoiled and made noises about "checking the records."

That's right old woman, you check those records. New glasses will be mine!

"Lily!" I said, "Would you like to try on all of these glasses?"
"Good news!" she nervously trilled, "They are covered by a warranty!"

When that failed she disappeared into the back office to confer with the doctor.

While she was out of the room I took a peek at the records.

Lots of post it notes- one in red said, "Same mess as above!"

Finally she returned. They could not find another pair of frames. They would have to call me with further information later.

In the meantime, I have secured the prescription and will be ordering some cute 9.95 glasses from Zenni.

The moral of the story: Don't mess with a shiny red mama.
Posted by Sara Padrusch at 6:42 PM 5 comments

In which I get pumped up on rage...

Tonight I am writing to you from the state of All Worked Up.

Why am I All Worked Up?

It is a long and boring story, so I will try to give you only the important details in chronological order.

1. We have a great eye doctor for twelve years. Yay eye doctor!
2. We get vision insurance for the first time ever this year. Yay vision insurance.
3. Great eye doctor does not accept this insurance. Boooooohooooo our eyeballs!
4. Make appointment with 150 year old eye doctor who takes our insurance.
5. Become concerned that eye doctor is both outdated and controlling.
6. Order Rebecca's glasses anyway.
7. Fight with eye doctor about picking them up without Rebecca just prior to our Grand Canyon trip.
8. Assertively tell doctor that I am taking the glasses anyway.
9. Feel the eye doctor hate me, but enjoy having bullied him back.
10. Rebecca enjoys her glasses for four months until they break.
11. Commence swearing.

You know what this means, right? I have to go back and request that the glasses be replaced. I am also going to request a copy of her prescription so that I can order her some cheap but cute glasses at Zenni.

I do not think that he is going to give up easily. In fact, I predict a battle in which I have to summon my inner Julia Sugarbaker and demand that he either hand over the money, replace the glasses or prepare to feel my wrath.

No matter what happens, I expect to spend the night like a general preparing for battle, imagining the tactics, the weaponry and the sweet glory of victory.
Posted by Sara Padrusch at 7:07 PM 7 comments

Why yes, we are going to need a bigger boat. Why do you ask?

All of this shark chatter led Lily to beg to be allowed to watch Jaws. Jaws is my second favorite movie. I love Roy Schieder. I love Richard Dreyfuss. Most of all though, I love people getting eaten by sharks. It is the most delicious kind of terrible thrill.

This does not mean that I thought that having Lily watch Jaws was a good idea, but I knew that if one of my children could handle Jaws, it was Lily.

It was the dog getting eaten that got to her.

"Why did he have to eat the dog?" Lily whimpered.

"Ummm. He was hungry? Don't worry though, I can guarantee you that there has never been a case of a pug being eaten by a shark." I told her.

This did not comfort her for some reason, so instead I explained about the magic of cinematography, the animal actor union and the mechanical shark. Finally she fell asleep, not so much reassured as desperate to escape my mind numbing descriptions of 1970's shark puppetry.

This morning she awoke refreshed and ready for a fresh wave of whining which included a demand that she be allowed to watch the end of Jaws. Luckily, what she lacks in sense, she possesses in cute.
Posted by Sara Padrusch at 4:11 PM 2 comments

Big Mistakes include deleting the utilities on my hard drive, backing into my own car with my other car and sanding the floor in my underwear.

Today my mistake was small, but serious.

I went to Trader Joe's while tired and hungry.

I bought a bag of Lemon Heart Cookies which have turned into a problem.

I purchased them at about 4pm and now, a mere four hours later they are gone.

They were lemony and sweet and buttery and zesty. And now they are gone.

However, I did not try to steal a baby gorilla from the zoo, so if examined in the proper light, I actually did quite well today.
Posted by Sara Padrusch at 5:06 PM 3 comments

For Amy on Valentine's Day...

I think that I shall never see
A friend as lovely as Amy.
She understands me like no other
Much better than my misfit brother.

Together we junk,
Together we laugh,
We eat chocolate together
Though our thighs may chaff.

She listens to me extol
The virtues of my dog
And faithfully reads
This silly blog.

The glue of our love
is neither fate nor time
but is instead the union
of our love of crime.

Bones, Law and Order
The more grisly the better
As fans together
we will write a letter

To the stars of our shows
Bobby Goren and Booth
Even Cesar Milan gets
A grin full of tooth.

Amy, my dear,
On this Valentine's Day
I would be remiss
If I did not say

That I love you quite dearly,
Through thick
And through thin
No matter what emotional state you are in.

You are my true pal
The best of the best
And because I have you
I can hate all the rest.
Posted by Sara Padrusch at 7:00 PM 4 comments

Lying through my teeth...

There are so many things I could tell you about.

The haircut I gave myself.

The puppies which were running across the highway and were saved by eight strangers.

My poor resistance to girl scout cookies which are stacked in my house.

I am not going to do any of those things. Instead I am going to do a years worth of flossing in one night, because tomorrow I have a dental cleaning and I am determined to not get the lecture about flossing.

So that's what I am doing. I am flossing to fool my dentist.

In February this is about as exciting as life gets.
Posted by Sara Padrusch at 5:56 PM 5 comments

The winter that beat me...

So there was more snow this week. And ice. Almost no sun. Just grey and cold and snow.

Things had gone kind of dark here at Shiny Red Houses. I don't like to use my blog for whining, so mostly I just watched Bones in bed and ignored housework.

By Saturday I had pretty much lost my will to live so I called Amy.

"Amy", I said, "I am going to Global Thrift today. I will be horrible company because life has no meaning, but you can come along if you want. It will probably be horrible."

Amy felt sorry for me so she agreed to shop with me.

It was there that my soul was once again saved by junk.

The aspect of my house with which I have been struggling the most has been my closet situation. My closet isn't even a real closet. It's just a small area tucked next to the stairs leading to the attic. Eventually, I'd like to get some Ikea wardrobes to create a wall of closet in our bedroom and turn the attic nook into a teeny tiny office area. But for now, the nook is my closet and it sucks.

Anyway, I walked into Global Thrift with Amy and went straight for the furniture section and it was there that I saw this sweet beauty. 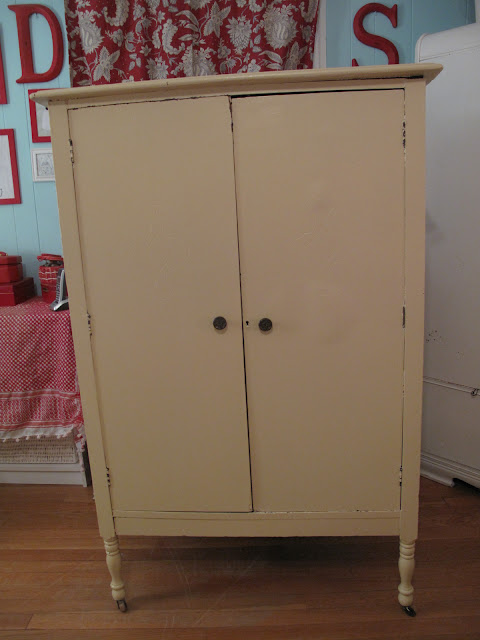 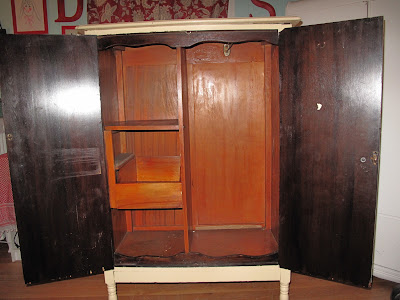 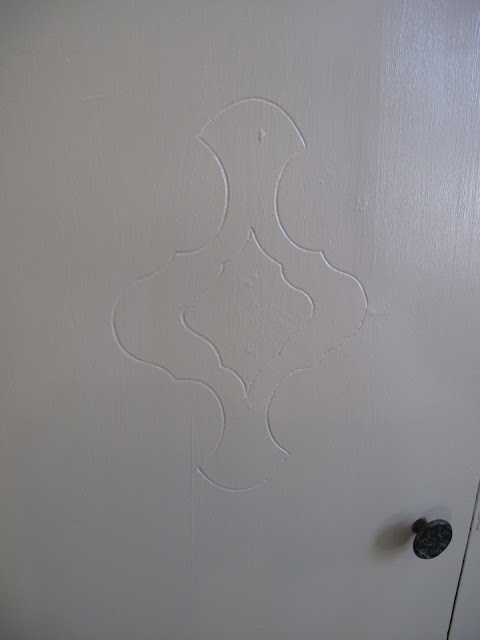 The tag read 19.99, but when Jose, the Global Thrift employee saw me examining it he let me know that it was half off- just 9.99!

This acquisition got me thinking and planning. Maybe I could put it in my room. Maybe even in my closet!

So many possibilities! Suddenly, I could feel the sun coming out in my soul. I had a new project, a new reason to bother cleaning my closet.

It was no accident that this morning the temperature was 45 degrees and that the sun melted the ice on my driveway.

It was the junk. It saved me. It can save you too.
Posted by Sara Padrusch at 7:19 PM 5 comments

Now with more Coffee! Free dustbunnies with every purchase!

Blogs worth your time